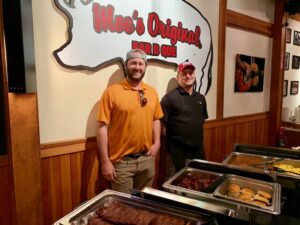 Southern BBQ is something that brings a community together – the smell of meat smoking, a savory rub, and that first tender bite.  Tahoe City’s very own southern BBQ joint is Moe’s BBQ, now celebrating 5 years right on the lake!  With its “local watering hole” appeal and southern feel, Moe’s has become a favorite among locals and visitors alike.

Moe’s owners, Josh Wallick, and Eric Pilcher met working in Vail, Colorado and bonded over all things very southern – whiskey, football, and music. Eric was born and raised in Alabama, and Josh grew up in Boston (the only Yankee they let in).  After meeting in Vail the two decided to partner and share their passion for BBQ right here in Tahoe City!

Josh is one of the best pitmasters in the company.   You could say he knows his way around an Old Hickory smoker. A true barbecue guru – whether its ribs, steak, seafood, or poultry – if it’s grilled or smoked, Josh can do it.  Josh’s wife Ginger hails from Mississippi and uses her knowledge of southern food as quality control for the restaurant.

Eric is the mastermind of the music at Moe’s. You can find him at most of Moe’s live music events.  Since moving into their new location in the Marina, Moe’s draws big names – such as Eric Lindell and Midnight North – and larger crowds. In addition to music, Moe’s hosts a variety of events, including rehearsal dinners and holiday parties.

Moe’s is ramping up for football season and will have some delicious offerings and specials during games, including Moe’s Bloody Mary’s, redneck nachos, and smoked burgers.

They will also be brewing their own beer soon!

Moe’s now hosts the Marina Breakfast Company in its new space, serving breakfast Thursday – Monday, 7:00 am -Noon, on the patio and in the dining room. The southern-style Shrimp and Grits have been a guest favorite!

Great Southern BBQ, breakfast, music and events – Moe’s is your one-stop shop on the lake in Tahoe City!  Catering is available, too!

This error message is only visible to WordPress admins